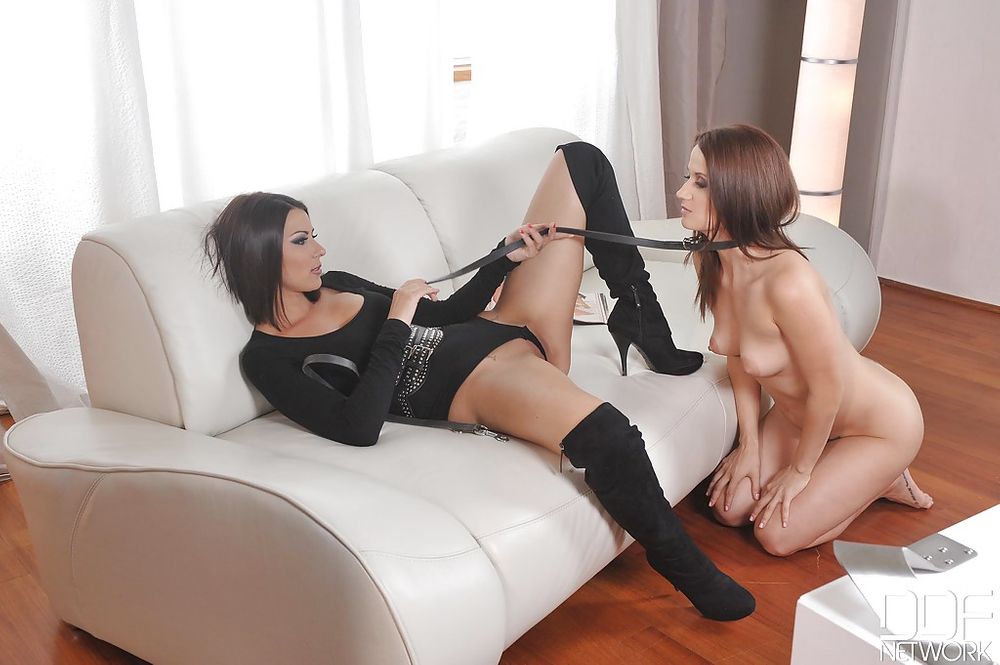 "I’ll be right back” -These were the last words Kitten Amber heard before her Mistress exited the room, leaving her alone with her thoughts.

Last night, she tried to dom her Mistress, she thought it fun, trying to reverse the roles for once. Her Mistress allowed it to happen, curious and amused by that cute attempt at domination. But that was yesterday. Today the natural order of their relationship was restored and Mistress told her to wait. So she will, she’s a good Kitten. She wonders what will happen today. Suddenly, the door opens and Kitten turns around to watch. She is struck by what she sees. Gone is her Mistress' usual look of a cute skirt and shirt. In its place, she wears a sexy black corset that covers her breasts and her midsection, lacy black panties and black heels, her long hair draped around her shoulder. And nothing else. In one hand, she holds a black leather crop, while she dangles some handcuffs in her other hand.

“Beautiful” - Whispers Kitten, dazed by the sudden vision of her Mistress

The Mistress smiles and closes the door behind her. When she turns back to look at Kitten, her eyes are narrow and her voice harsh.

Why? Why does her voice sound so harsh? She’s usually so sweet. And why does this tone of voice makes her pussy tingle?

Shocked and a bit afraid, Kitten starts to undress. She pulls her shirt above your head and unclasps her bra, letting it fall to the floor. She then pulls down her skirt and panties at the same time, hurrying in order not to disappoint her Mistress. She then stands, in her full naked glory, in front of her Mistress. Her eyes looking down, like she was told to do.

“Turn around, hands behind your back”- Again, the voice of her Mistress sounds like a whip, harsh, inflexible, and so sexy.

Again, she feels her pussy tingle as she complies, turning around and clasping her hands behind her back. She doesn’t understand. Why is Mistress so different, did she do something wrong? Was it because… of what happened yesterday?

“Why are you being so harsh, Mistress”- She doesn’t understand, she needs to understand.Why? Why? She hears the footsteps of her Mistress behind her, getting closer. The soft tapping of Mistress’ heels on the wooden floor of their playroom, the only thing she can hear besides her breathing. She then feels her hands being grasped and the handcuffs closing over her wrists. The soft leather restraining her wrists behind her back, hugging her wrists almost lovingly in their tight embrace. She could feel the blush creeping on her cheeks, she loved being handcuffed so much. Lost in the pleasant feeling, she cries out in pain when she feels the burn of the crop swatting her ass.

“Did I gave you permission to speak?” - Once again, the harsh tone of her Mistress cut into her, and the feeling is even more intense than the crop. She feels small, so small. And hot, hotter than she ever felt. A burning fire lighted up in her loins and every word of her Mistress is like a gust of wind which fans the flames of her desire.

“N-No Mistress” - She answers in a whisper, afraid that even this answer may grant her another spanking.
“Until I say otherwise, you will only nod or shake your head to answer. Understood ?” - This voice again, so sexy, so sweet, dripping with pleasure and pain alike.

Each word Kitten hears feels like a tongue on her ear, whispering and teasing her with promises of endless pleasure.

A simple order, one Kitten can follow at once. Without thinking any longer, she sinks to her knees, head bowed and waits, in silence. Overwhelmed by the raging feelings in her mind, torn between her lust and her fear. She hears Mistress’ heels around her, as Mistress circles her, like a predator playing with her prey. Suddenly, she feels like the mouse that she usually chases around. Trapped. No escape for her. She feels Mistress’ crop teasing her skin as she circles her. Just a feather touch, running along her back, her breasts, her ass, her tighs, so close, so soft.

“Yesterday, you tried to take control”- She hears her Mistress speaks, still with the same tone, as the crop teases her nipple.

She can feel it harden under the crop, she’s getting so wet, so excited. “It was a good attempt.” She can almost hear the smile in Mistress’ voice, as the crop runs along her hips. Kitten forces herself to stay still, no reaction, less Mistress uses the crop again, but she can’t block the whimper that escapes her lips.

Crack A slapping sound echoes in the room as Mistress brings down the crop on her behind. Kitten lets out a soft cry, as a burning feeling spreads on her ass. It hurts, it hurts so much. But it’s also…..so good. The crop now teases her neck as Mistress keeps circling her kneeling form.

“Because”
The crop is on Kitten nipple, rubbing it slowly.

“You are just”
The crop hits the nipple quickly, making the tit bounce and the nipple stiffen even more.

“My”
Another hit on the nipple, but the pain almost didn’t register as it was already stinging from the last hit.

“Little”
This time a hit on the other nipple, completely unexpected, tears a cry out of Kitten.

“Slut”
The crop hits her ass with strength and she lets out a moan of pain as she hears the word that seemed to define her at this moment. Was that what she was? Was that how Mistress saw her? It wasn’t the first time Mistress defined her like this, and like every other time, she could feel her pussy getting wetter. But this time it was different, more intense, deeper, stronger. She felt the burning feeling in her nipples and ass spreads all over her body like she was about to become ablaze with lust. Suddenly, the crop is under her chin, forcing her head up to make her look at Mistress. Mistress, in her wonderful outfit, the black leather hugging her shape tightly like the embrace of a lover that would never let her go. Her hair, darken by the low light in the room, spread around her face like a halo of black light. Her piercing brown eyes, usually so warm, cutting deep into her, like she was staring into her soul and judging her for what she was worth. To Kitten, she appeared as a Goddess, able to bring pain and misery as well as love and bliss just by her wish. She was enraptured, lost in a sea of unfamiliar feelings as pain and lust battled in her body.

“Isn’t that right, Slut?”- The word again, ringing in her ears, going deeper into her mind.

If Mistress said so, then that was true. She nods. Mistress smirks and lets go of her chin, resuming her slow pace around her. Her crop still tracing shapes on Kitten’s body as she walks.

“To be a good Dom, you need balance”-  Mistress said as she stops behind her and rests the crop on her ass.

Kitten shivers with anticipation as she feels the cool leather on her bare ass, still stinging lightly from the last slap. “Balance between pain” Another hit from the crop, landing in the middle of the cheek. Painful, so painful on her sensitive ass. She chokes on a sob, a single tear, forming in the corner of her eye.

“And pleasure” - Now the crop was rubbing her pussy, spreading her warm juices over her crotch and thighs. Kitten moans, she never felt pleasure like that.

It was like pleasure was magnified thanks to the pain she felt earlier. Her pain was almost forgotten as pleasure rushed in her body, spreading from her crotch to her abused ass, her stiff nipples….

“Between harsh” - The crop comes down hard on her nipples, cutting away the nice feeling she was experiencing and replacing it with pain, pain worse than before.

“And soft” -  Now the crop was teasing again, her other nipple. The contrast between the two was slowly easing like pain and pleasure was shared between the two. The raging feelings were making her dizzy, she didn’t know how to feel, how to speak. There was nothing else remaining except the pain, the pleasure, and her Mistress’ voice.

“Between fear”- Once more, the crop went under her chin, forcing Kitten to look upon her Mistress.

She looked angry, her lips turned down in a frown, her eyes narrowed. And Kitten felt fear, fear like never before. Like her life was in the hands of this vengeful Goddess in front of her, one that could send her into eternal suffering on a whim, if she so chooses.

“And love” - Then suddenly, it was like seeing the first rays of the sun after a storm. Mistress’ face lighted up from inside, her eyes sparkled with joy, her mouth stretched in a wide smile. And Kitten felt Loved like she was the most loved person in the world. Happiness, Joy, Love and Bliss, was in her grasp. She just had to ask and all her wishes would come true.

“Between desire”-  The crop stroked her cheek on its way down her body, teasing her breast, her nipple, her toned abs and stopping to rest on her pussy in an explosion of pleasure. She felt her juices coat the crop as she pants in arousal and need.

“And orders” -  The crop was back in front of her lips, shining with her arousal in the low lights of the room. The intoxicating smell of her lust was just under her nose and her head spun from it.

Without thinking, Kitten opens her mouth and let her pink tongue lap up her juices on the crop, licking and licking until all trace of her arousal was gone. Seemingly satisfied with her work, Mistress removes the crop from her lips and lets it rest on her breast.

“Do you understand?” - Kitten nods. She did understand. She understood her place, her purpose, her very reason to exist was here, in front of her, dressed in a black corset. She was to serve, to obey, to worship her Mistress.

“I could teach you that,” - Mistress says, resuming her circling. - “I could teach you how to make any woman throw herself at your feet to worship you”  -This idea held no appeal to Kitten, she knew her purpose, she was to serve not to lead.

“Or. I could teach you to serve”. - YES, that was it. The familiar tingling in her pussy was back in full force. Kitten feels the crop rubbing her ass before hitting it again, but forces herself to remain still. Good kitten, good girl.

When Kitten put her lips on the crop, it felt as if all her worries and all her doubts disappeared. There was nothing left of it but peace and calm. It felt so right, so clear. Then, Mistress bent down and grabbed a fistful of her hair.

“Today, you’ll learn to obey. Follow me!” - Mistress then started to walk away, pulling Kitten behind her by her hair. Kitten crawled behind her Mistress with a smile on her lips. She wasn’t scared anymore. She finally found her purpose.