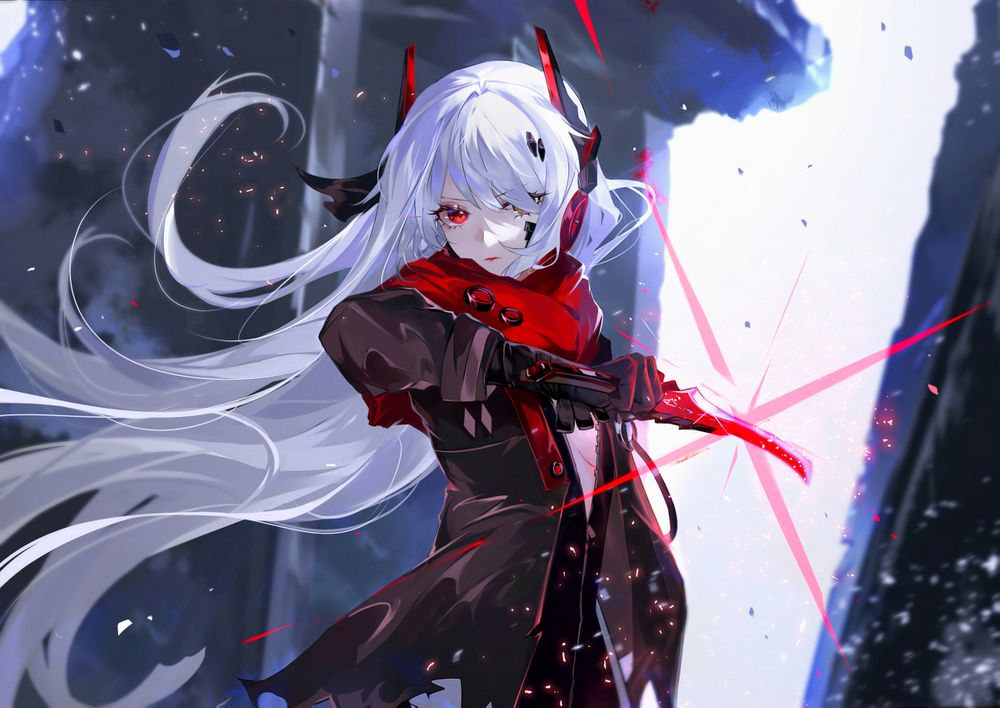 Initiating the program in emergency mode...

The machine arduously moved her body around so it was easier to reach for the vision module. Unfortunately, the scanner was influenced by the emergency mode and she wasn't able to tell where precisely it was located.

She tried moving her hands trying to feel it... trying to find anything until finally, her fingers reached something that seemed like a very cluttered shelf... She started browsing the items and moving them away trying to find the promised module.

She kept searching until she finally felt the familiar shape beneath her fingers.

She grabbed it, and with a cold motion, put it inside her head, right in where the right eye would normally be.

As the android finally managed to restore her sight, at least partially, a sight of a desolate compound unfolded before her. Long gloomy corridors that haven't seen a living soul in ages now fallen into ruin, a reminder of a once glorious past that was no more. She looked around the room she was in, trying to recognise her surroundings but to no avail.

The robot tried getting on her feet, but each time resulted in a rather harsh fall as soon as she almost made it to the standing position.

Having no choice, she started crawling on the floor that was probably insufferably cold. Only the fact that she was an android, a machine made to imitate humans protected her from the unfriendly environment. As she kept slithering on the ground she tried recollecting some memories about how she had found herself in this situation but all attempts were cut short with the cold agonising voice of her system. Each time she advanced an inch closer to her destination a new warning was issued.

But no matter how many warnings she received, she didn't plan on stopping for even a second. She didn't feel fear nor hesitation, not that she could in the first place. She was only a machine designed to fulfil a task. Feelings weren't part of her program. And now that program told her to restore her body to working condition.

She crawled near the door leading to a workshop. At least that's what the label on the door indicated.

She tried pushing the button near the doors, but the hydraulic lock held them tightly shut.

"I don't think I have much choice indeed..."

She moved her body again so she leaned with her back against the lower part of the door, placed her hands on a handle of the upper part and started pushing it upwards.

After a while, the lock finally gave up and she managed to open the way, at least partially. She grabbed on the handle and tossed her body over the lower part of the now unlocked gate.

Warnings invaded her relentlessly, not stopping for even a split second now with every single move she made. She knew she won't make it far... She had to find the spare power module as soon as possible... She gazed upon countless shelves and cabinets located in the room, trying to spot anything that would resemble the part she was searching for when suddenly her vision went black.

The cyborg didn't hesitate for long. The lack of vision didn't move her at all. After all, it simply made her task harder, but no matter how abysmal the chance to succeed was, she had to try. That was what she was programmed for. She kept crawling and searching the boxes, cases, tables and shelves, trying to feel for anything that would resemble the module.

She kept searching. And searching. Finally, she reached a case with some kind of latch. It was big and heavy and as she moved it, a sound of metal clacking reached her ears. She unlatched the box and reached inside it.

She moved her hand to her chest to open the panel covering her damaged power module.

With one swift motion and zero hesitation, she grabbed it and started pulling with all her might trying to get it open as soon as possible.

She kept pulling but she was a fine android. One of the best models. Durable, never fails, the very fact she was able to reboot her system was the proof of this. But the polymer she was made of stayed untouched.

She kept pulling, trying to rip that chest apart. She can fix it later. But if the power runs out, it's all over.

The material started giving up... A small hole was formed in her chest, revealing the inside modules and machinery.

She ripped the old module out, tossing it away

She reached for the new module with her hand but she couldn't find it. She couldn't see it. It was nowhere to be found.

Suddenly the room went silent again, as the android went offline once more...

As the machine opened her eyes, she was immediately blinded by an intense white light that seemed to come from directly above her. Trying to avoid it she tried turning her head but no matter which direction she tried, the light relentlessly kept blocking her vision.

She couldn't tell much since new components weren't yet fully operational but she managed to determine she was laying on some kind of metal table or bench.

"That's strange... But I don't think the system is damaged. Someone must have repaired me."

The android finally regained control of her limbs and as soon as she did so she tried getting off the table, only to be stopped by some kind of shackles on her wrists and ankles. She tried yanking with both her legs and hands but to no avail. Whatever held her in place was made so it could resist her attempts to breach this temporary containment.

"I see... I'm in some kind of... facility. The number of floors is enormous... And the said facility is certainly erected above ground... it must be visible from afar...*

"And there's no data on such a facility either... I should get out of here...*

The machine tugged again, trying to rip the shackles off, again not achieving the desired outcome. Suddenly her optics started becoming clearer and clearer, till the complete disappearance of the white light blocking her sight.

The android looked around at its surroundings. She was in a white, clean room, one that very much reminded a laboratory with all kinds of advanced devices and high-tech innovations laying all over the place. She tried getting up, only to be reminded about her restraints. She directed her sight to them. A set of 4 metal fetters kept her tightly locked in place.

The girl kept looking around and she noticed a huge cable attached to the bottom of the table. She traced the other end connected to a port of a huge computer unit. She glanced over to the monitor displaying all sorts of complicated code and numbers.

"I should try getting these off first..."

The android carefully observed the progress bar on her HUD, when suddenly she heard the sound of a hydraulic lock being disengaged, soon followed by the sound of footsteps of people entering the room.

Given that she needed to buy time until the hacking is complete, she tried acting as if she was still offline. Even if it won't buy her much time, it will at least push it a little back in time.

"Please check the status, Michael" - A man with an Asian accent said to what seemed like one of his assistants.

"Do we have any scheduled tasks for today, Dr Li?" - The same man, turned to his right now and asked his other colleague.

"Yes, the Director wants us to hasten the process of bringing the android back into working condition. They were really persistent this time and I don't think we will be able to prolong it much longer."

"That's crazy! When we found her, she was as good as a piece of junk with some sophisticated software! Even if we manage to launch the system it will take time to get her accustomed to new parts!"

"Sir...? She's online." - Michael, the assistant checking the PC unit said, interrupting the other scientist in his livid rant.

Android yanked on her shackles once more, trying to break free. Once more achieving nothing apart from screams from the surprised research team.

"Where am I? Who are you? Why are you keeping me here?" - The girl started asking the researchers, trying to buy more time and maybe get some useful information about her whereabouts. After a brief moment, necessary for the scientists, their leader finally spoke:

"We're currently in the Dharma tower. A facility designed for research and maintenance of high-end technology. I'm prof. Koizumi Mitsuo and I'm the lead researcher of the "Omega" project. I'm... We are the ones who brought you back into working condition. These are my assistants. Dr Michael Shaw and Dr Clara Li."

Hearing the question, the man working on the PC unit responded:

"Our scavenger team found you in a really bad condition. Almost all core modules were destroyed and you had a big hole in the chest. In other words... A piece of junk with very sophisticated software. It's a miracle we made it work. It took almost 7 months. Spare parts... You can't buy them. We had to make everything from the scratch"

When Michael finished the female doctor took over and continued:

"We had to develop new alloys that will be able to handle massive g-force and provide decent protection from possible attacks and the effects... Well, they are beyond any expectations. A direct hit of a nuclear missile wouldn't leave a scratch on you now."

"Why are you keeping me locked here?"

The question echoed in the room, putting an end to the conversation just like a gunshot to the head. Soon, nothing but the heavy sound of silence was left. The researchers kept giving awkward looks to each other, knowing the android is carefully observing their every move. The 3 of them had a lot to explain to her, and a long day full of different procedures and checkups was ahead of them.

Hey! Gabi here! I know the ending may feel kinda prematurely cut but in fact that's what I have intended! The original piece is about 15 thousand words and I decided to split it into few parts so it's easier to read and well, you can always look forward to the new chapter! I hope I managed to pick your interest and you're looking forward to see the next part of the adventures of the android!

In the next chapter we'll learn a lot about the world and the reality she found herself in so make sure to read it thoroughly once it is published!