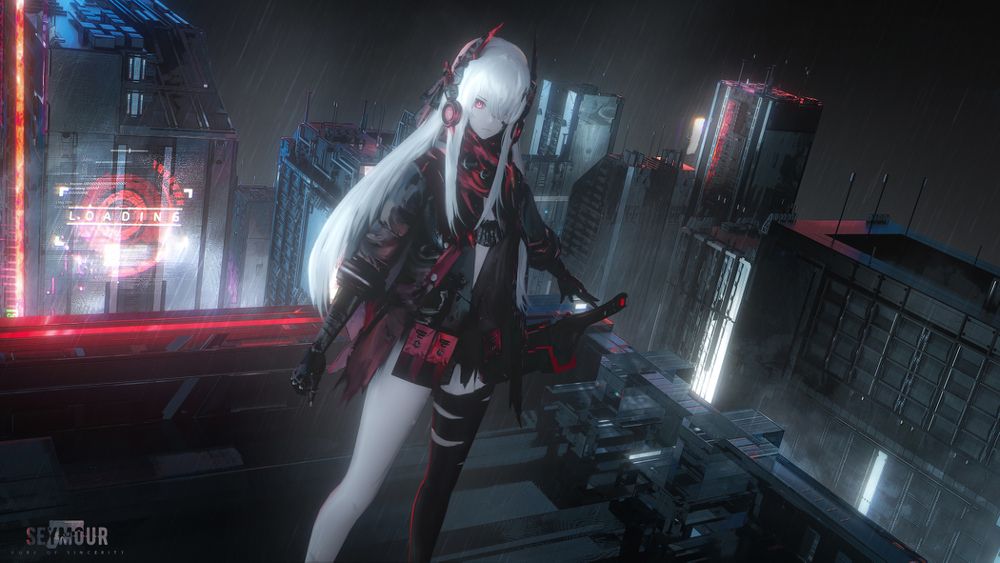 Fair warning: The story isn't lewd and contains depictions of violence and so on.

The heavy silence made the ambience so heavy that one could possibly feel its weight on their shoulders. The scientists looked at each other, exchanging nervous glances. Finally coming to some sort of non-verbal agreement the lead researcher stepped forward and stopped right in front of the shackled android.

"You're... A piece of unknown technology. Our scavenger team recovered you from a demolished OBEIRON facility" - he started

"We... Didn't know the state your systems were in... We couldn't risk potential dangers. There was a risk you'd go on a rampage right after booting your system up. That's why..."

"So you will let me go now?" - The android asked laconically.

"You want something from me, don't you?"

"Yes. We need you. So, we'd like to extend an offer to you... "
"Feel free to reject it though." - The doctor reluctantly added

Warning! The statement is false.

"Who are you? What is your relation to OBEIRON? Who am I?"

"We're... We are members of the Trinity Corporation. Our main task is the development of military technology for the US army" - the male assistant responded.

Accessing Database
Trinity Corporation: Military organisation of US army. US response to the project OBEIRON

"Yes. We... We have developed a number of amazing solutions but nothing has come even close to the combat efficiency of a battle android." - The professor responded.

"You... What?" - the female researcher asked, shocked by the question. It wasn't weird though. She was a robot, a machine. How can a machine want something? It doesn't have feelings. It wasn't normal.

Suddenly the conversation was interrupted by screams of panic as the shackles keeping the android in place unlocked, putting the researchers in a state of shock as the things weren't as much under control as they thought they were.

The android didn't waste any time, she dashed from the table she was on, right next to the place where scientists were. It didn't take even a second as she dashed, putting her new systems to use. She was the pinnacle of military tech. Nothing could compare to her. Inhuman reaction speed, the durability of an atomic shelter, the velocity of a high-speed projectile. A machine made for killing.

Neither of the assistants stood any chance as she grabbed them by their heads and smashed them on the ground, leaving nothing but the bloody mess and two decapitated bodies. She was left alone with the appalled lead researcher, who tried escaping. This attempt soon turned out futile as the android leapt once more blocking the path in front of him.

"I'm going to ask you questions now... And you're going to answer. Nod if you understand"

The researcher was still dumbfounded and in shock so he didn't realise she was speaking to him. Annoyed by the lack of answer she approached him and with her blood-covered hands, she grabbed him by his white lab coat, painting it with the dark shade of crimson red.

"Nod if you understand." - She repeated once more, with a slight trace of annoyance. Annoyance? She wasn't familiar with the feeling, but it occurred to her as something natural. Something that always has been part of her.

The researcher nodded, hoping he can avoid sharing the fate of his deceased colleagues.

"T-t-ttrinitty tt-ttower! The main research facility! O-oonn the 73rd floor!" - The researcher felt something warm on his leg as a dark splotch appeared on his pants*

The android didn't waste any more time on the man and snapped his neck with one swift motion. She dropped his lifeless body on the floor and approached the PC unit.

With this, she was able to obtain access to all data stored in the VOLCAN system. She looked around the room, trying to spot anything useful.

"I probably should get going... It won't be long until the alarm is raised..."

She approached the reinforced door and looked at the panel on its right side.

The very recognisable sound of the hydraulic lock being disengaged reached Gabi's ears as two wings of the gate moved aside, allowing her to move to a broad corridor with broad windows. She approached one of the glass barriers and looked outside.

She kept slowly walking with her hands covered in blood. Each step she made, left a bloody trail on the floor given that the excessive amount of the red fluid was leaving wide splotches after her. But she was too busy appreciating the captivating sight of the city covered in the night. The neon lights, cars, people... Skyscrapers... It was truly a sight to behold.

She made her way into another room with white walls. As she moved inside one thing immediately caught her attention. Well, it was the only thing in the room apart from her after all. It was a full suit of body armour and a sword reminding a katana.

The girl approached the suit and effortlessly put it on. It was really fitting for her since it was made especially for her. That's when she realised that she was actually naked the whole time. It didn't bother her much but something didn't feel right and was making her slightly annoyed about this fact. She took the sheathe with the sword inside and attached it to the belt on her waist.

She left the room and approached the window trying to get a look at her reflection.

She stared at her face, or rather her eyes. One red, one grey. Apparently, they decided to leave her with the spare part she found at the desolate facility. Suddenly, she heard the sound of steps, coming from the direction of the lab she was imprisoned at.

The girl unsheathed her sword with a crimson red blade and waited. As soon as the door opened revealing two characters in combat armour, Gabi dashed forward with inhuman speed slicing both of them in half. A second later sound of two bodies falling onto the floor echoed in the room and the corridor. The girl looked at her blade and immediately noticed that the blood droplets weren't adhering to the blade.

WARNING: LEVEL 3 SECURITY BREACH DETECTED
All non-military personnel is to evacuate via nearby nearest emergency exit
Complete lockdown of the facility in T minus 5 minutes

The girl stared at her HUD with new warnings displayed.

"Good thing I connected myself to their system. I should probably get going though unless I want back on the table. Or worse."

She rushed back to the corridor, intending to jump out of the window but as soon as she got there, she noticed that her potential way out is now blocked by metallic plates made of some alloy.

The android didn't waste any of her precious time and kept pushing forward, trying to reach the elevator shaft. She opened the map of the floor on her HUD to make the navigation easier.

Complete lockdown of the facility in T minus 4.5 minutes

Finally, she found herself at the end of the long corridor leading to the elevators. But she wasn't the only one to do it. As soon as she had the destination in sight several characters in similar combat gear as the two guards she killed before aimed their guns at her.

"Thanks. I could use the warning a little earlier though." - The girl said to the voice in her head and ran straight at her foes.

They were well-trained men, with years of experience in combat with the usage of firearms but they were facing an opponent they couldn't match. Before first bullets headed in her direction she already made it halfway through. The rain of bullets fell on the corridor, but none of these could reach the android. She simply dodged them all. It was as if the time was going slower for her.

As soon as she reached them, they ran out of bullets in their magazines. Now instead of the sound of shots being fired the corridor was full of screams of pain and agony as she sliced their limbs off, efficiently killing one after another, painting everything around her in a dark shade of red.
Crimson red.

She didn't bother inquiring the VOLCAN system about it. Instead, she forced the elevator door open and jumped inside the shaft. She caught onto the ladder on the other side and started climbing upwards. She knew that all elevators are blocked during the emergency procedure. Or at least that's what the system told her.

A small window popped in her HUD, with the view of the landing zone. A group of about 70 people, with heavy guns and advanced combat gear, was waiting. She knew that they carried no ordinary guns. They had the right equipment to fight her.

She didn't hesitate even for a second. She jumped down the shaft, facing the increasing resistance of the air as her decent rate kept increasing.

Complete lockdown of the facility in T minus 2 minutes

Around floor 20 she grabbed onto the ladder again, to stop her fall, causing the ladder to fall apart. But she made it. She kicked the door blocking the entrance and jumped inside the parking lot.

A sight of many different vehicles unfolded before her, but as soon as her eyes spotted a red-black motorcycle, she knew she wants exactly that one. She somehow felt it was made for her. She ran towards it, in order to avoid wasting any time and mounted the driver's seat.

"Crimson Red? I'll need to search the system about it later."

She started the engine and headed towards the exit of the garage.

She finally made it to the streets. She didn't know where she's heading. Any remote quiet place would do. She kept going forward until she reached the outskirts of the city, or an old construction site to be precise. She found a dark corner and tried gathering her thoughts and knowledge of her situation trying to come up with a plan of action. After all, they will certainly come after her. Trinity corp. And whoever is in charge of it, won't let her go so easily.

Hi! It's Gabi here! I hope you enjoyed the new chapter ♥
And sorry for the cliffhanger again. I wanted to keep the tension before unfolding more of the action! Hope you're looking forward to the next chapter and don't hesitate to let me know what your thoughts about it are!