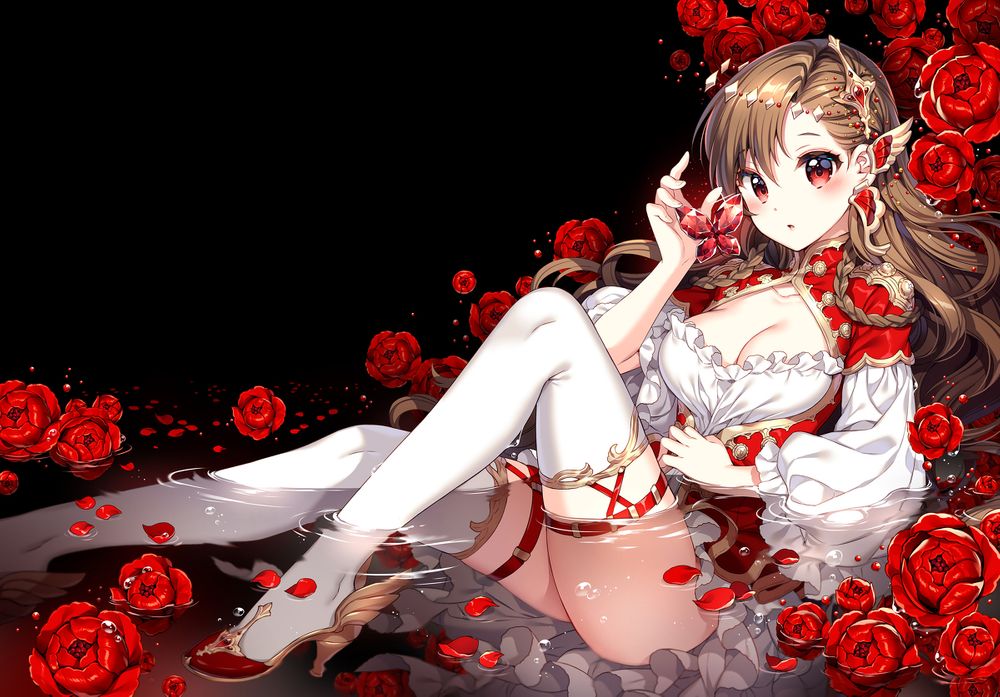 A word from the author:

Heya~! It's me, Duchess Gabriela~! I know it's been a while since the last chapter but I really got busy with a lot of different things on EF and I never had much time to write something longer~ >.> I'll try to be more consistent with publishing new chapters tough, even though they will be on hold until I'm finished with promised articles about mods. And on the final epistle, I hope you will enjoy this succinct revival of the story ^^

The Cherry Blossoms' Mansion was busier than usual today. A whole lot of staff members had been mobilised, be it a servant or a guard, everyone had an immeasurable amount of work to deal with. Despite the fact that it sounds like a normal day for everyone who works in such a unique place, in reality, it was everything but usual. It was the day on which Her Grace was granting audiences to people of lower social standing. In other words, it was the day where Duchess Gabriela, the Mistress of the aforementioned mansion was passing judgement on the affairs of common folk or lower-ranked nobles who would have it difficult to have their cases solved through usual means.

The tradition of organising such an event monthly has been started by William IV, the ruler of one of the old kingdoms that used to exist ere he united them and forged one state that is now known as the Spirit Realm. He was a wise ruler who knew that in order to successfully hold the sway of his domain, he had to gain the hearts of the commoners so the internal peace was established and the country could flourish. Throughout the centuries the idea had been forgotten until His Majesty King Winston, the father of the Duchess, had reinstalled it. The aforementioned day had been announced 3 years ago. Since then, it had become a very important tradition in the life of both the nobility and common people. What's worth noticing is that it wouldn't be possible if not for the excellent work of His Majesty and the acting Chancellor, who did an excellent job of reviving the economics of the country and created the first census.

Amid the whole commotion and countless amount of tasks to attend to, nobody had time to check on a mysterious fellow who had arrived at the mansion yesterday. Given that, it's only natural that the aforementioned man had to attend to himself. After using the utensils that servants had left for him right before the door leading to the interior of his shack to get himself cleaned from the dirt "acquired" throughout his long journey, he gathered his equipment and headed towards the throng. After all, he knew that every journey meets an end at some point... And if Her Grace was indeed as the rumours had described, then perhaps... Perhaps the issue and injustice that were troubling his soul might have been resolved as well.

As time passed, more and more people were allowed into the grand hall where Her Grace was fulfilling her duties. The Ronin, despite being in the crowd himself, didn't feel like he was part of it... Everyone was struggling to get a better place in the queue but the guards of the Dukedom weren't ones to mess with. Every attempt to do so was met with an inevitable eviction to the end of the waiting line. He thought that it was nothing out of the ordinary since people who live in poverty will try to leap on every single chance to improve their living conditions, so that doesn't stand for the benevolence of the Duchess whatsoever. He had to remain vigilant... He had been betrayed in the past, and it's better not to repeat the same mistakes twice. That's why he decided to make his way in. He had to see for himself...

Using the skills he procured via years of training and harsh experience he managed to sneak in through the back entrance. The passageway he found himself in, was overwhelming in its grandeur. The floor made of the finest marble, decorations made of pure gold, you could easily tell it was part of the Duchess' mansion. The Ronin was promptly attacked by his doubts. Was she yet another noble, ravening on the poor for their own benefit? No... He couldn't decide just yet... It's not good to judge the book by its cover... Yet he couldn't dismiss a certain odd feeling... Something was odd... He headed towards the main part of the building, where her Grace was. As soon as he opened the solid door made of laminated wood, he realised what was bugging him. He didn't hear the throng at all and as soon as he crossed the entrance, he discerned that the hall the audiences were being held in was insulated. That, naturally, was the only explanation for the ominous silence that stunned him in the foyer.

He glanced at people gathered inside... One might have said that the sight resembled the one of a wild ocean... The overall turmoil felt as if it was beyond any control, and one was only able to go with it or be triturated. The astonishing amount of souls sitting on the benches, which reminded pews one can find at Church, was something one could see only in places like that. He knew he was about to witness the moment of truth, and see for himself the true colours of the rumoured Lady. The knights of the Dukedom cleared the route for the Duchess. The anticipation grew with every second, and every second felt like an eternity when finally the announcer spoke:

The door suddenly opened and the announced lady entered the hall. The noblewoman was wearing a long white-violet (#1520A6) dress, white elbow-long gloves and leather knee-high boots with a 3-inch heel. In addition to all that she was also wearing a lot of perfectly-matching jewellery, adorning her beautiful visage even more. The moment Her Grace entered the hall, all voices went silent, almost as if the wild sea that the Ronin observed before, had been instantly calmed down by a beautiful goddess that appeared in its centre. The Duchess, slowly walked towards the throne she usually sat upon while granting audiences with all eyes focused on her. The pressure everyone else would feel if they were in her place was truly unmeasurable but if she felt any, her outward demeanour didn't betray her at all.

When Her Grace assumed a sitting position on her throne, the chamberlain, walked to the middle of the hall with a big scroll in her hands and after a moment of silence with a very firm voice she began reading:

-Dear Members of the high council, Dear Audience. We have gathered here, in the presence of our benevolent Duchess, to witness the trial of Viscount Quinn of Quinn viscounty, charged with fraud. The indictment against him has been issued on request of John Doe, a farmer, in possession of the field under the jurisdiction of Viscount Quinn. According to the law, His Majesty has set in order to keep our Kingdom thriving states that one possessing an agricultural area of land larger than 2ha, shall donate 30% of their harvest to the local lord, yet according to the young farmer, viscount claimed 60%, trying to illegally sell the excess amount in the black market. Does the accused plead guilty?

-No. - The Viscount replied, with his slightly hoarse voice. - I have nothing to hide and these are false charges made on no legal basis.

As soon as these words reached the ears of everyone gathered, a murmur of voices deafened whatever Viscount added at the end of his reply.

-Silence! - The chancellor shouted, restoring the order - Viscount Quinn, if you are truly innocent then you should be able to provide the proof. To be more precise, as we all know, every single container of wheat had to come with a certificate of its origin. We have investigated your granary, and we found an excess amount of wheat. Unsurprisingly it matched the amount mentioned by the plaintiff when he reported the case. What's more every single excess bag doesn't have a document showing how the wheat has been obtained. We have also testimonies of people working at your residence. Given all of that, there is little doubt about your guilt.

-After these words, the silence in the room felt so heavy that one could physically feel the pressure. Based on the nobleman's response, a large scandal could occur, and maybe even cause far-reaching consequences. The stalemate lasted for a while, but everyone began to realise that Viscount is simply guilty and has nothing to say in his defence... The Ronin, disappointed that the scene he witnessed was inconclusive and didn't allow him to judge the fairness of Duchess, was about to leave when he noticed that everyone's attention suddenly shifted to Her Grace.

She slowly approached the Viscount who was silently standing with a depressed expression.

-This man is certainly guilty - the noblewoman started - but it's not enough to decide on his punishment without learning the reason behind his actions.

As soon as she said that, the confined man rose his head and said:

-I've... I've been blackmailed, your Grace. T-they... T-they... Have my daughter... I had to organise money somehow... If not... they told me they'd kill her... She's the only one I have now, that my wife passed away... I don't care what happens to me but please... Now that I have failed her life is endangered, please your Grace! Listen to my humble request! I h-had no choice!

-I know. I've looked into your case beforehand and already apprehended the perpetrators. Your daughter is safe and sound in my mansion. Although... The fact that you have committed the crime and lied to me remains... - She looked at the man before her and after a moment of hesitation continued - You will have your title revoked and the authority in the Quinn viscounty will be passed to your daughter when she comes of age. Until then it will be managed by the person I shall appoint soon.

A few moments later, the trial came to an end and the Duchess left the hall and headed towards the main part of her residence. The way Her Grace handled the case was a truly unusual sight for the traveller who had witnessed numerous acts of cruelty and abuse of power by those who held it, given that, the Ronin, still uncertain, decided to ask for a private audience with the Dame. Although, he knew he had to take care of his looks first. That's why he decided to leave the hall and headed towards the nearby emporium where he could acquire all the necessary commodities.

With that, the day in the mansion came to an end... The servants were finishing their duties, and the night guard was changing places with the keepers who served throughout the day. The manor was preparing for a period of well-deserved rest, that was bound to be soon interrupted...