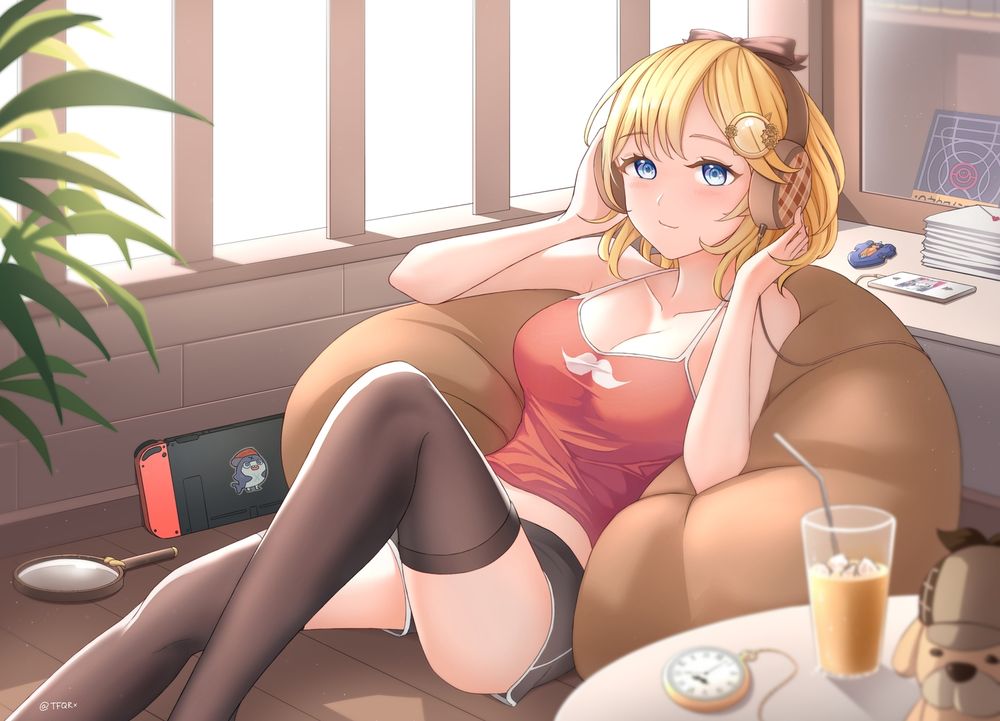 I'm in serious shit. I feel totally lost
If I'm asking for help, it's only because
Being with you has opened my eyes
Could I ever believe such a perfect surprise?

Eyes half-closed behind her blonde fringe, headphones covering her ears, hood over her head, Iris was waiting for classes to start, sitting at her customary last row to the right, just waiting for this day to be over. Friday afternoons were the worst. So close yet so far from the weekend. And three hours of physical chemistry was not her definition of a good time. "Study Chemistry, you’ll see, every day is an adventure." Yeah right. The closest she came to an adventure was crossing the bridge between her flat and the university. Stupid recruiter and her smiley face.

The arrival of her teacher brought an end to her internal muttering as she cut off her music and removed her headset and hood. She briefly tried to smooth her blond hair sticking up in all directions as the teacher was heading towards his desk.

“Settle down” - he asked, waiting for students to stop stop the chatter.

Iris tuned the teacher out since she had no desire to hear about another Miss Perfect Score. The ones in her classes were enough already.

People started to applaud and Iris joined half-heartedly, not wanting to stick out. She finally caught a glimpse of the aforementioned person as she came behind the teacher’s desk. She was rather tall, almost the same height as the teacher so around 1.75 m, long brown hair tied in an elaborate French braid, framed a heart-shaped face. She was a bit too far to observe her face in details, but she thought she saw long eyelashes, highlighted by an expertly done make-up and pale lips. She seemed to have a very professional aura, wearing a blue blazer and skirt reaching her knees. Dark pantyhose accentuating long legs and shiny black high heels completed her attire.

“Good afternoon students. As Prof. Gellert just said, I am Dr. Abigail Winchester and I’ll be your new physical chemistry teacher for the semester. I’m looking forward to teaching you.” She said in a calm and assured voice, seeming perfectly at ease talking in front of a class full of students.

“Damn, what a hot stuff, I think I’ll be in need of some one-on-one lessons” Iris cringed after hearing the remarks from other students in the back row, and the crass laughs that followed. She didn’t know whether the teacher had heard them, but if she did, she was ignoring it superbly.

After excitement dropped down, their usual teacher exchanged a few words with the new one before exiting the classroom.

Dr. Winchester took some paper from her bag and started the lesson. It was clear that even if she looked young, she knew her stuff. She even managed to explain several notions that Iris struggled with in a way that made sense and time flew until the bell rang.

As soon as class was over, the teacher tidied her desk, closed her satchel and exited the room. "Maybe she is in a hurry, it's Friday afternoon after all" thought Iris while she put her stuff back in her bag.

And with that they were gone, all the girls of the class exiting the room together, giggling and whispering to one another about what they were going to wear tonight, boys they liked and places to hang out. All the girls….except Iris of course. She should be used to it by now, the girls have been ignoring her since last year. She was sick for the first month of classes and by the time she joined, all the group of friends were already formed. And she was too shy to try and join one. Loneliness was now the norm for Iris. The last time someone talked to her was maybe last week, the cashier at the grocery store, telling her how much she needed to pay.

Putting her headphones back on her head and pulling her hood up, she left the room, hands in the pockets of her large grey hoodie. Alone, like always, just her and her music.

I keep asking myself, wondering how
I keep closing my eyes but I can't block you out
Want to fly to a place where it's just you and me
Nobody else so we can be free

As she walked to her flat at a leisurely pace, lost in her thoughts, she started to cross the bridge above the small river that runs through the town. But someone was already there, standing against the railing and looking down at the river below. Brown hair in a French braid, blue blazer and skirt, black leather satchel on the floor next to her, Dr. Winchester was seemingly lost in thought.

The bridge was narrow, barely fit for two people if they walk side by side. She was going to have to make her presence known to her new teacher if she wanted to cross. She could always make a detour, but it was going to be much longer. Come on, it’s just crossing a bridge, you don’t need to talk to her. But it was hard, for a reason that she couldn’t really explain, she was intimidated by the woman. Steeling her nerves and taking a deep breath, she started to cross the bridge.

She walked at a fast pace, wanting to cross the bridge as fast as possible, head down looking at her shoes so that she didn’t catch her attention. She was about to pass her but just at this instant, the doctor decided to put her head in her arms against the railing and thus, moved her legs backwards. Iris, walking too fast, stumbled against the legs of her teacher and fell down harshly on the ground, barely managing to get her hands out of her pockets to save her face from the first degree meeting with the ground.

“Oh my, I’m really sorry. Are you alright Miss?” the young professor asked, holding out her hand to help her get back on her feet.

“I’m fine” Iris answered in almost a whisper, embarrassed from her fall. She grabbed the offered hand and got back on her feet, ignoring the pain in her knees.

“I apologise, I was lost in thought. Are you sure you’re alright Miss ? I can call for a doctor if you’re hurt?” Dr. Winchester again, concern evident in her voice.

“No really, I’m fine. Don’t worry about it Professor” Iris answered, not looking the young doctor in the eyes, already starting to walk away.

“Professor ? Do we know each other ?”  the brunette asked again, a perfect eyebrow raised in curiosity.

Crap, why did I answer that. “Hmmm... I’m attending your lecture on physical chemistry at the Uni.”

“Oh really ? Well a pleasure to meet one of my students, even if I wished the circumstances were better.”

“I guess I’ll see you in class next week. Don’t be late Miss…?” She trailed at the end of her question, clearly expecting Iris to answer.

“Very well Miss Shaw, once again my apologies for your fall. I’ll see you next week.” With a gentle smile, she turned away towards the river again. Still blushing lightly, Iris started to walk away, her hand still warm from the first human contact she had in a long time.

And I'm all mixed up, feeling cornered and rushed
They say it's my fault but I want her so much
Want to fly her away where the sun and rain
Come in over my face, wash away all the shame

Once Iris arrived at her flat some time later, she removed her sneakers and painfully pulled down her pants, hissing when the rough material of her jeans scraped against the torn flesh on her knee. Cleaning the small cuts, she stayed in her panties and sat on her bed, thinking back on her encounter with the young professor. Why was she on that bridge, seemingly lost in thoughts?  And her hand still tingled from when she helped her up. Her skin was so soft, and warm….

Stop that, you’re not about to fantasise of your teacher like those morons. Not like she’ll want you anyways.

Shaking her head to get rid of those unwanted thoughts, she laid on her bed, music still in her ears, unable to stop her train of thoughts, she finally fell into a restless sleep, full of warm brown eyes and soft skin.

When they stop and stare, don't worry me
'Cause I'm feeling for her what she's feeling for me
I can try to pretend, I can try to forget
But it's driving me mad, going out of my head

Hello everyone, I'm Clara. Thanks for reading this article. I'm just a kinky girl that fell in love with this place so don't be shy and come say hi on EF or Discord.