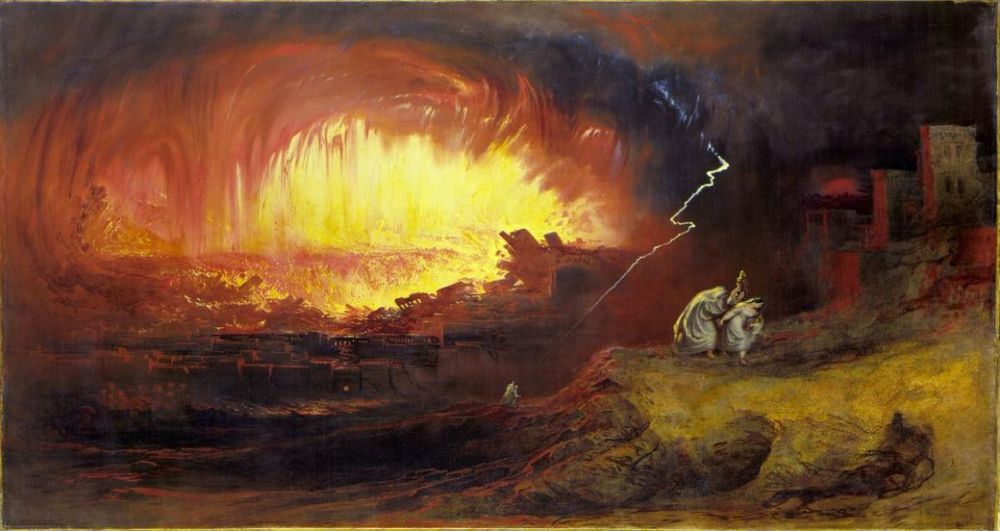 I place the clean dishes on the dish rack and turned to look at my guest.

“All paths are God's path. If we accept that God created everything, and is all powerful, then all paths are His path. All the good things, all the bad things, they all come from God.”

I raise a tired eyebrow at the girl standing in the kitchen doorway. She had soft, shoulder-length brown hair, and a hard face like iron. She looked older than her years, and she wore a sword belted at her waist.

“Be careful, Winston,” Saint Joan of Arc said. “Those who play with the devil's toys will be brought by degrees to wield his sword.”

“Make light of this all you like,” Joan of Arc huffed. “Your soul faces damnation.”
“Thanks for the tip,” I said, and threw a rag at her, which she caught easily.

“Now do me a favour and wipe the dining table. They call you the Maid of Orleans. The least you can do is some cleaning.”

“PROCESSING,” the robot behind the counter said as I flinched at its loud blaring voice.
“DID YOU BRING A SAMPLE OF YOUR AVATAR?”
“Jesus. Yes, I did. Here.” I slid a piece of paper with a string of letters and numbers on it.
“PROCESSING.”

The change was, to say the least, electric. Bones snapped and lengthened, my hair withdrew into my skull and bursted forth again with its shape changed. My eyes sockets widened to accommodate larger eyes. My legs stretched and pushed me into a taller frame. My blue body took on the contours of the uniform of a British Peer.

“CHARACTER EDIT COMPLETE.” The robot shoved a mirror in my face.

“Jesus fucking Christ,” I said as I stumbled backwards before righting myself.

The face of Sir Arthur Wellesley stared back at me.

I step out of the small MY CHARACTERS office building and begun walking to the Classic matchmaking lines. The offices were far from the action. They were small, dumpy things compared to the glamorous highrise towers of the games themselves. Already they have taken on an air of decay and neglect.

This new body felt great. As I took a longer, more circuitous route to the towers, I noticed that I was slightly taller than I previously was, and being in such a dashing uniform did wonders for my towering ego and confidence, making me stand out in a sea of blue men.

Traffic was excellent today, and very soon I arrived at the waiting room, where I sat cheerfully and spoke with everyone there, excited at who we might be paired up with. Some were complaining about having to make new accounts, because they couldn't recover their passwords. Some were complaining, as usual, about being first and waiting for hours. Some were discussing strategy, which was a new thing to me.

“Strategy?” I said incredulously.”Don't you just take off each other's clothes and go at it?”
“Actually,” a blue said, “There are advantages and disadvantages of removing your partner's clothes...”

“...Jesus Christ,” I said to myself as my eyes slowly started to glaze over the strategy talk. Suddenly a shrill scream pierced through the waiting room.

Thank God, something stopped all of strategy talk. I leapt to my feet and walked to the source of the scream.

A crowd was looking into a game room. The door hung on its hinge with what was left of its frame. It looked like a bear smashed through it.

“Out of the way, chaps,” I said, pushing my way past crowds of blues and into the room.

Several of the girls were hugging each other... no, hugging one girl... who was crying incosolably.
I stepped closer and knelt to better observe the deep red cut on her cheek.

“Who did this to you?”
She sobbed and pointed at the window. It was shattered as well.

Saint Joan of Arc was waiting for me when I got home. She was outside my door, sharpening her sword.

“You knew something was going to happen today,” I said to her.

“No,” Joan said without looking up from her sword. “I am your subconscious. you knew something was going to happen today. You chose to ignore the signs.

I looked at her pleadingly. For answers.
“What would you have me do?”

Joan stopped sharpening her sword and stood up, raising the blade to my cheek.

“This sword is made of pure silver. A sword of a saint, used to drive back demons from the abyss. I killed many English with it.”

She drew her blade across my cheek, mirroring the one the girl had suffered. With one practiced motion she returned the sword to its scabbard and offered its hilt to me.

I took the sword and turned to leave, making it three steps before I was stopped.

“Winston.”
“Joan?”
“Our Lord and Savior Jesus Christ loves you.”
“Sweetie,” I said as I drew the sword's strap across my shoulders.
“Tell Mr Christ to get in line,” I drew the strap close so that it clung tight over one shoulder.

That's where I found it.

A towering creature, even as it curled itself on the ground, sleeping. The office behind it was shattered beyond repair. I could still see the lettering on the signs, or what was left of it.

No wonder some people have had trouble with recovering their accounts, recently. The Forgot Your Password office was destroyed.

The creature was a man. If men were created to resemble black smoke and feathers. Under the sifting smoke and feather-like texture of its body, you could just make out an outline of a blue person... only this was black, rotted, corrupt.

The sword of Saint Joan practically leapt out of its scabbard and into my hand, it sang its glorious song.

The demon-smoke-feather-man stirred, rising to its feet, towering over the office buildings, over me. This thing could never have fit through the door at the game tower. It seems to have been swollen by whatever unholy power that wrought it, gaining a massive size.

The battle was mercilessly quick. You really shouldn't do all this dumb posturing when you've never actually fought a demon with just a fucking sword. The creature moved with the speed of the devil, and brought its claws crashing into my face, slashing great waterfalls of blood and blinding my left eye.

Several more blows and slashes tore through my body, sending me flying and crashing into an office wall. I used to be pretty big on anime. I thought I knew what to do in these situations.

So I coughed blood on the floor, and sagged down against the wall.

The creature towered over me... and knelt on its great knees, its glowing eyes boring into mine.

Do you know not my face?
“Sorry, it's all smoke and black feathers, can't see shit.”

Like a grotesque book, the demon's face writhed... and split open, revealing a face. It was mine.

My face, or that of Sir Arthur Wellesley, stared back at me.

I stared in shock as realisation dawned on me.

Those who play with the devil's toys will be brought by degrees to wield his sword.

I smiled sadly. I did this. We all did this. Our relentless hasseling of the reds. The endless messages, the pent up libido, it turned toxic at the waiting line.

My body began to shake. First with shock caused by blood loss, then with clear, ringing laughter. Inaudible at first, until it eventually rang across the offices in maniacal tilt.

I felt as if in the throes of orgasm. My head was thrown back, I was in bliss – relief flooded everywhere, a certain feeling of... gladness. It all became clear now.

I wiped tears from my right eye, my shattered left long ceasing to see the world before it.

“Let me tell you this in terms that you'll understand,” I said squarely to the nonplussed demon.

“You can resent women all you like for ignoring you. You can pester them as much as you want. They're here to have fun. And if you don't let them have fun, if you make them fear... they'll leave.”

I spat blood on the ground. It was filling my mouth.

“And then where would we be?”

I carressed the demon's human face. My face.

“Be kind... be respectable... but most of all...” I falter at the final word, gasping for breath.

The demon began to shrink, smaller, smaller, until I could no longer see it.

I clawed my way back up to my feet, and took the long way home, limping and bleeding.

“All done,” Saint Joan of Arc said, stepping back to take in her handiwork.
“I'm a mummy,” I stretch my hands out comically, bandages covering all of my upper body.
“Your eye will heal, God willing,” Joan said, belting her sword back to her waist.
“I hope you learned something, Winston.”
“Don't think that playing Dark Souls will make you a demon-killing badass?”
“That you should always view people as... people. Not a set of orifices you can own.”
“You can buy those now though. It's called a fleshlight.”
“Your crass words betray you. You are far more intelligent than this. You are better than this.”

Joan stepped forward and hugged my head, pressing herself against me.

“Winston.”
“Yes?”
“Take your hand off my bottom.”
“Neverrrr....” I squeezed, and released, turning my head away from her out of embarassment.

Joan turned to leave. As she headed for the door, I called to her.

“Joan?”
“Winston.”
“Will I ever see you again?”
“Get in line,” the patron saint of France smiled for the first and only time.
“Mommy's busy.”