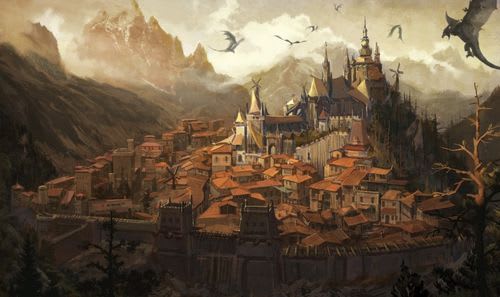 A messenger, Kaelan, sweating and exhausted from his travels, finally reached his humble abode off the outskirts of the Royal City of Empyrium, just as the redish glow began to stretch across the landscape of farmland. A long stretch of travels still awaits him; he is carrying with him the sealed reports on the locations of demons, succubi, and other dark beasts looking to seize the city with their torment. He feels this weight on his shoulders, knowing he likely has a target on his head, but the day of travelling has left him weary, and with a journey as long as his has been, Kaelan takes the opportunity to rest in his own cottage. He quickly fell onto his bed, still wearing his traveling tunic, the comfort of his own house allowing him to quickly catch up on much needed sleep.

Little does he know of the mysterious figure creeping through the shadows towards his abode. A smile appearing on a succubus' face as she finally has her prey trapped...
The door to his hut squeaks open. The sound caused Kaelan to jump, as he wearily looks up, his eyelids struggling to move up as he rubbed them off. In his blurry gaze he sees a dark, shadowy figure of a woman step into the light of his lantern, a smirk upon her face as the darkness seems to cling to her body. Her pale, almost blueish skin seems to shine darkly, against the light of the lantern, as she slowly struts into his view. Her body had an intense allure to it, almost intimidating as she stood over the man, still in a stupor from waking up, her figure leaving little to the imagination.

"My name is Sarela, dear, I saw you traveling down the road for some time!" The succubus' eyes suddenly glow with innocence as she corners him, her body seeming to reach out to him and call him to ask for things no one could ask of another.

"I figured you would want some company, just for the night, after your long travels~"

"No.." Kaelan said, his vision slowly clearing up. "I bring important.news..to..." Kaelan begins to trail off, as he finally now gets a glimpse of the person now beside him. The woman stood just a few feet away from him, standing with her hands cupped in front of her, innocently. Her pale skin did indeed have an unnatural blue tint upon it, and as the shadows seemed to dissipate, almost eerily, into what looked like a dress. She seemed almost too perfect, with no blemishes in sight.
"I bring news to the king..Demon." Kaelan said, his eyes now wide awake. He was in a rather comprimising position laying beside her. He quickly sat up against the wall, still in his brown tunic that he showed up in. He broke into a sweat as he realized why she was here.

Sarela's eyes began to glow a pale purple haze as she let off her innocent facade. "Demon? My name is Sarela, dear Kaelan, and I'm Sure it is of value to me." Her voice sounded more flirtatious than before, almost teasing at the man as she and Kaelan both knew he was trapped. She raised a hand, and within moments, a blackish glow emerged from it, traveling as it engulfed Kaelan in its shadowy glow. She lifted the man into the air, placing him in complete statis by the foot of his bed, against his houses' walls, cracking a smile. Kaelan tried to fight her magic, but it was clear that he had walked into a setup trap, that was just sprung, there was no escaping for him...

"Wh...what do you want from me?!" He asked, wincing as Sarela reached her hand into the pocket of his ragged tunic, pulling out a pristine looking message with a red seal on it. His eyes went wide. "H...how did you know of this?" He watched in horror as she raised her hand towards him, a deeper, purple energy flowing through it. His clothes began to discintegrate as she suddenly stepped back, admiring him. His muscular, bulky figure had been well shaped by his job as a messenger, the deep sun kissed tan stretching across his body. His broad shoulders and long, flowing, brown hair, began to flow with the waves of dark magic seeping through him, suspending it. He filled her with a demonic lust as she layed her eyes upon his crotch, he certainly had plenty to work with. She could see his muscles tensing and relaxing, his face in almost a wince, as though he was trying so desperately to resist her. But he was far too exhausted for that..

Sarela held her face in a pout, hiding her intentions for the moment with an evil, teasing allure in her voice.. "ooohhh..poor Kaelan! Of course we knew, we've been following you all along. Don't worry.." She reassured him, the message burning in her hands as she stepped forward to caress his shoulders, her silk-like skin caused his skin to burn with pleasure, unavoidable from a creature as alluring as she. "This will stay our little secret if you will let this go~~" She giggled as she stood in front of him, his back pressed against the walls, she could feel his muscles tensing, a desperate attempt to escape. She could also see the dim glow of the sunset giving way to night, as the lanterns shine became more apparent.

Kaelan's blood began to boil, as he tried but failed to do anything but struggle. Her hand gracefully caressed along the back of his neck, still warm from a long, hot day of travelling. He let out little gasps, as he held his breath, working so hard to escape her magical grasp, but to no avail. He let out a sigh, filled with worry, as he stared at her with his fearful gaze.

"Oh, boy, don't be afraid! I can FEEL how worked up your body has been, from all this traveling..just let this go..."

"Y...you know I can't do that..I...hnmm" In his state of fear, he couldn't help but begin to feel arousal, her smooth rubs along his neck seemed to melt away stress from his body. Desire began to well up inside of him, intensely. "S...leave me be!" He cried out, his emotions confused between fear and arousal as she stood, her body centimeters from pressing his, her warm, inviting breath slowly seeping onto his chest.

"Oh...You can't resist me, just stop trying." Sarela said in an authoritative voice, giggling. "I can tell you are struggling, do I have such an effect on you?" Her hand reached down Kaelan's chest now, moving lower, lower. "Perhaps I may need to convince you?"

She frowned as he still struggled. "Oh? You want that, dont you? You still want to scurry off and tattle to the king about us? Well, if thats the case..." Her hand was now sliding softly down, below his waist, Kaelan let out a shudder as her hand reached his crotch. He was filled with almost inhuman levels of lust as she held him..

"I am going to have to make you my personal toy~"

Hey there, I'm Kaelan, just a rather submissive guy who enjoys roleplay more than most. I enjoy writing for people, especially so when they enjoy it as well! Have a great time :)