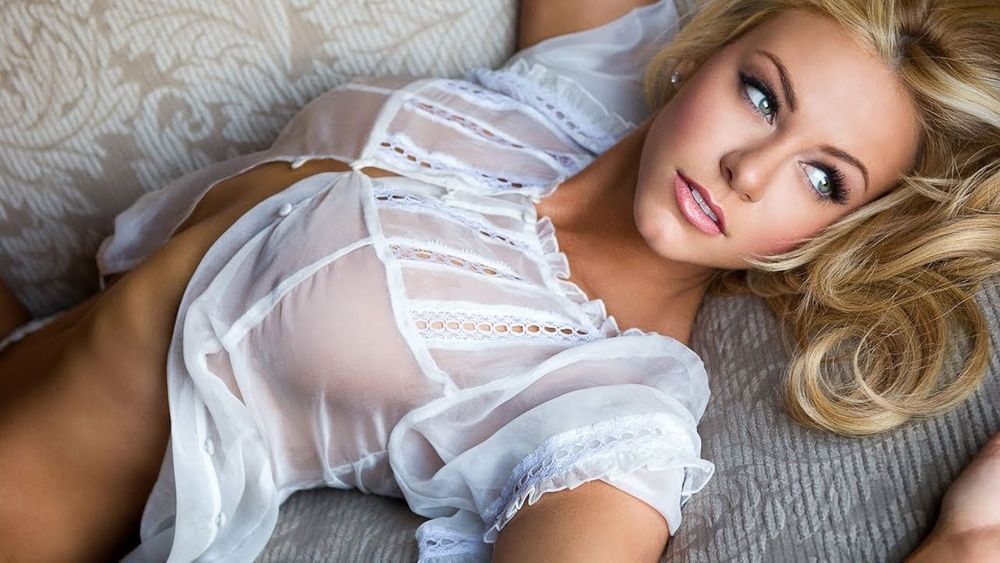 The crowd gets worked up as our contestants prepare to return to the mainline tournament - John G Vs Tanya. Getting in quick, John gets close and grabs Tanya's boobs through her top, admiring how admittedly lovely they are. Tanya responds by flashing her panties to get him worked up a little more, announcing that she's about to make him explode and get some coins. His reply to this was to hogtie her and make sure she can't get anywhere near those coins. With some rolling around, she is able to get free and kiss him deeply as she takes off his shirt. Helping this along, he takes his pants down, leading to Tanya taking his boxers off, leaving John naked and hard for all to see.

Levelling things a little bit, he takes her pants down but soon she is on her knees before him, playing with and teasing his cock. Getting on the offensive, he rubs her pussy through her exposed panties, making her let slip some moans before she starts tying him up. In an impressive show of skill, he manages to fuck her mouth, sliding his hard cock past her waiting lips. She pulls off and kisses his abs as she gets her breath back, then lubes up his cock as she starts stroking it. John gets a bit cheeky as he records her on his phone, making her laugh as she flashes her panties and tells him to keep recording as he cums for her.

Getting the audience to distract him, John is temporarily distracted by Poki's tits, only to turn around and have Tanya get her girls out as well, making the crowd very happy indeed. She returns to stroking his lubed cock, licking his ballsack. Wanting something a bit different, he readjusts and starts fucking her tits, then reaching into her panties and making her taste how wet she is whilst her tits get a nice coating of his pre-cum.

Toying with his cock, she assures him she's ready for it and wants to see what he can do, whilst he is focused on continuing to fuck her tits as his dick gets harder. Changing the pace, she slides down to her knees again and licks his ballsack. Before they get down to it, he peels her panties slowly down with his mouth, letting her masturbate and show him her wet pussy. In the audience, Poki finds herself getting wet with Tanya, allowing Trix to tease her over her leggings as they watch the match heat up. As this goes on, John pulls his foe on top of him and makes her ride his cock, thrusting up into her from below, moaning at how tight her pussy is while she moans loudly.

The fight comes to an end with her being too exhausted to continue, securing the win for John. To see all of the sizzling hot details of this encounter, see the header above for a link to the fight logs.

On the other bracket, Climber takes on Kendra for their respective teams' bid to reach the final. Stakes are high not only for the competitors but also for the betting crowd in the audience...

Climber takes the initiative and unzips Kendra's dress, tossing it as he lets the audience get a good look at her gorgeous figure. She retorts in kind, taking his pants down. Before she can blink, he whips out his cock from his boxers and surprises her with how thick and hard he is. This backfires as she simply grabs it and strokes it aggressively, catching Climber somewhat off guard.

Pushing her back and slapping her ass, Climber gets some breathing room as Kendra slips her robe off, leaving little to the imagination. He takes her bra off as he kisses her, then slowly slides his hand down her body to tease between her legs, getting some soft moans from her. Changing tempo, she has her opponent lick her pussy, which he does very well, before he moves back up her body, leaving a trail of kisses before he gently bites her lower lip. As the teasing heats up, she mounts and rides his face, once more enjoying how his tongue feels on her pussy.

Getting up from under her, Climber fucks her mouth, no doubt to help with her oral fixation. She grinds her ass against him to tease his dick, giving him the chance to slip a butt plug between her cheeks. Not taken with this, she goes back to enjoying herself on his face again, this time jerking him off as she grinds on his lips and tongue. He gets out once again and teases her pussy with his fingers whilst kissing her all over. Declaring that they have done enough foreplay, she tells him that she wants his big dick in her pussy, to which he happily obliges. Getting comfortable, he spoons her as they fuck, making her moan loud for the room to hear.

She rides him cowgirl yet again but he punish fucks her for the effort. The crowd feels the tension as the two warriors engage in battle, trying to wear each other down. He fucks her in front of a mirror, giving worry to the ladies in the crowd cheering for Kendra. But she resists and fingers his prostate... which he also resists, causing the audience to gasp in disbelief. It becomes more intense as he fucks her from behind and she resists yet again, causing the crowd to go wild as both fighters simply refuse to break!

Spreading the word for folks to come and bear witness, Leon makes the first move as he pulls Diana's top down without warning, revealing her tits. She shows off her oral skills, sucking on a lollipop. He gropes her breasts and makes her moan, whilst she orders him to massage her feet first. But he feels he can't do that with clothes in the way, pulling her pants down and off. She takes his shirt off so they are a bit more evenly matched, which brings a smile to Leon's face and leads to him removing his pants. Diana starts to stroke his cock but he decides to jump ahead a bit and starts slowly fucking her mouth. She puts on an innocent voice and sweetly teases by asking for a facial.

He slides a finger into her pussy and makes her have a taste of her sweetness before she goes back to sucking on his cock. Taking advantage of their position, he make her taste it as he thrusts his cock deeper into her mouth. Finding herself enjoying it more than anticipated, she does the work of two mouths and sucks his cock relentlessly, working his shaft with both her hands and mouth. As he moans in pleasure, she works his balls, sucking and licking them. Realising he is losing momentum, he massages and fingers her pussy, distracting her enough to break away and treat everyone as she covers herself in oil. Leon retorts by bending her over and whipping her ass with a belt.

Diana goads him into fucking her, which Leon happily does, thrusting into her and slapping her ass as he fucks her. She lets him take the lead, hoping he starts to tire himself out a little. He picks her up and holds her whilst fucking, testing her limits. She turns the tables and flexes her stamina, teasing him with her stocking-clad legs as they fuck hard. He uses her ass to try and break her but she taunts him as his attempt fails, then jumps off him to massage and suck his cock. Bringing her into a standing 69, Leon makes her feel the pleasure with his tongue. Diana breaks free and jumps onto him, fucking him as they stand up, but he shows his own stamina and resists her attack. She calls in a friend to double-team him but in a risky move, he pushes them aside and fucks Diana into a mating press, catching him off guard and making her quiver as she cums!

Draining and milking his cock, she doesn't stop until he's empty and collapses onto the bed, revelling in her victory. Team Climber and Diana advance further into the tournament, whilst Kendra and Leon take their places in the Jobber's cup. Check the header for the link to the complete log.

Americas Regionals round 2: Andromeda Vs Michael

Meda and Michael get settled in as they await the adoring crowds, with him making the first move by taking off her top. Mesmerised by her tits, he gazes upon them as she takes down his pants, admiring his already hard cock in his boxers. As she is on her knees whilst he shows off his abs, she slides his cock in between her bra and teasingly tit fucks him as she runs her hands over his body. He thrusts up and has her lick his cock whilst she works her magic, all as she effortlessly removes her heels and casts them aside.

Teasing him with her pussy as she strokes his cock, the battle for dominance begins to feel a little one-sided as Meda taunts him with her ass, lips and tits, whilst she touches herself as he whispers sweet nothings into her ear. Enthralled by her words, he pulls her close and slides his cock into her ass, making her tease him with some lewd moans, before taking control once more and sandwiching his dick in between her sensational ass. Desperate to taste her again, he gets between her legs and sucks her clit whilst she uses a vibe on herself. Seizing a chance to gain an edge, Michael ties her to the bet and takes the vibe Meda was using, turning it up and putting it to good use.

Andromeda takes the win and moves her team into the finals and, with this victory, brings an end to round 2 of our tournament. To see the complete fight, feast your eyes upon the header up top.

The finals have already begun as this post hits you, but you won't have too long to wait before we bring you all the juicy details of victory and bittersweet defeat.