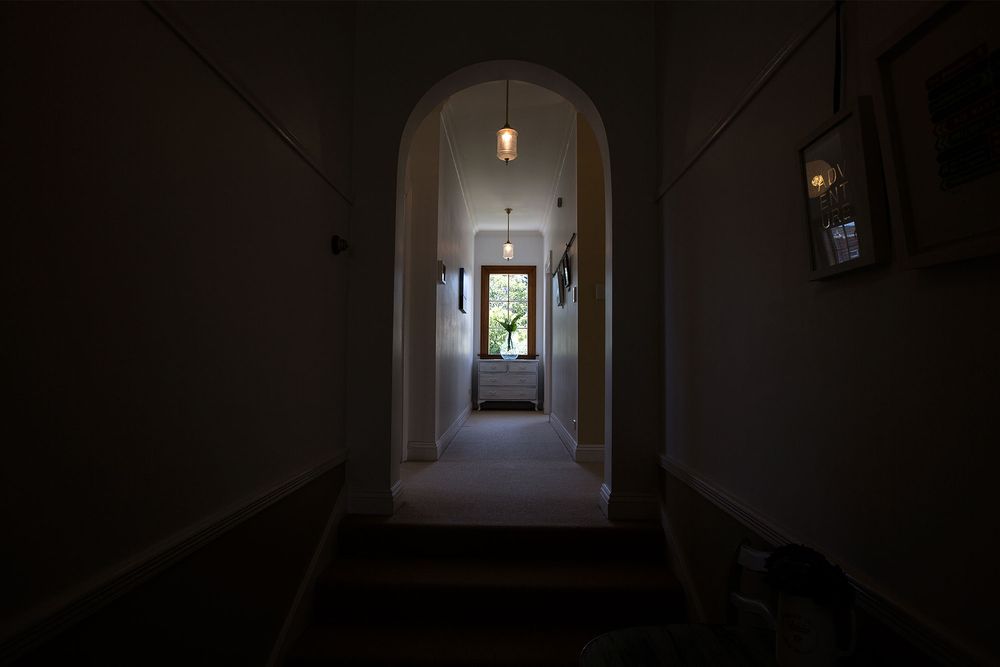 When she was young, Ashley's parents always told her not to open the door for strangers, especially if neither her mom nor dad were home. When she was an adult though, she assumed she'd be fine to open the door without checking who was on the other side first. She could protect herself now, right?

She would find out in only her second year of living alone.

At the youngish age of 23, Ashley had a stable, full-time job in graphic design, a decent-sized apartment, and plenty of friends and family. Overall, she was content with her life. And yet, she always had an odd feeling, as if she desired something more out of life. She never knew quite what though.

One particularly boring Monday evening, Ashley sat at home, bored out of her mind as she sat around with nobody to talk to, and nothing to do. Her friends at work were all busy, her family was on vacation, and her other friends were all enjoying their three-day weekend with family. However, a sharp, sudden knock at her door shook her out of her boredom. Nine fast, yet almost sporadic thuds, seemingly of inconsistent force as well.

Taking a deep breath in, and out, Ashley proceeded to scream at the top of her lungs; "WHAT THE HELL IS THAT!?"

The creature didn't react to her sudden outburst, however, as it wandered in past her, having to crouch down to fit inside the small room. As it passed her, it unknowingly gave her face a quick brush with it's giant dong, much to the shocked young woman's annoyance.

"H-hey! Big and hung- I MEAN- Uh, b-big and u-ugly! What the hell are you, and what do you think you're doing!?" Once again, her distressed cries gained her no response, as the monster happily sauntered on into her kitchen...

...And opened her fridge, pulling out a can of beer.

"Wh- Hey! Not the beer, man!" Ashley exclaimed, her priorities obviously favouring the can of alcohol over the appearance of the thing stealing it.

However, this odd switch in priorities finally seemed to get the beast's attention, Its line of sight slowly drifting down to the girl, much to her renewed fear.

As it stood eerily still, she drank in the creature's now stationary appearance once more. Its limbs were freakishly long and thin, Its fingers and toes being nearly twice as long as one would expect them to be in comparison to the rest of Its hands and feet. It had skin that seemed reflective and smooth, almost like a porcelain doll's. The odd creature's face was one of the more terrifying aspects of It's appearance, being a simplistically patterned white mask seemingly melded into It's head on the sides. It has an odd pattern of mirrored, light-red diamond shapes around the eye 'holes,' and pink patches of blush on the cheeks, as well as a wide, happy smile to round out the face. On any other body, it would look normal, maybe even cute, or funny. But on this body? It was horrifying. And that's not even mentioning the absurdly big ding-dong between Its legs.

Then, as she appraised the creature, it finally spoke. Its voice seemingly echoed through her mind, and was shockingly soft, almost calming, it even had a hint of a slight British accent. "Ah, hello, human. I am oh so terribly sorry! I mistook this for my own home, but it seems I've somehow ended up in the human world. Truly my mistake! Please, excuse the intrusion."

The shockingly polite creature returned the alcoholic beverage to the fridge, and bowed the best It could manage in the enclosed space. "My name is Kynashai, though you may call me Kyn. To be honest, I didn't notice you at first due to my inability to see, and my telepathy generally tunes out any unwanted noise, so I didn't hear you either! I once again must apologise most deeply."

Just as the unexpectedly calm and well-mannered creature finished his sentence, Ashley finally snapped out of it, picking herself up off the floor and standing to face the creature. "Okay, alright. This is fine, Ashley. There's just a giant, totally hung, surprisingly polite demon guy in your apartment, you're fine, everything is fine. Hoooo boy, okay, happy place, happy place... And, uh, Exhale, um, think of, t-the feather... Urgh..."

And then she snapped out of it properly. "Alright, yeah, NO. Whatever the hell you are, get your lanky ass out of my apartment RIGHT NOW, you oversized puppet-like freak, or I'll, uh, c-call the cops on you for, uh, i-indecent exposure, and breaking and e-entering, er, and s-stuff!"

The tall being then slowly trudged back towards the door, casting the occasional shy and apologetic glance back at the angry young girl, before stepping outside and closing the door behind himself.

Ashley, quite understandably shaken by the experience, lied down on her couch, flopping her arm over her forehead. Well, she certainly wasn't bored anymore. She decided to completely try and wipe what just happened from her memory, because she certainly could never understand it, even if she tried.

Then, as all seemed calm and quiet once again...

She heard nine knocks at her door.

{Thanks for reading! More parts are coming soon. -Eee333eeE}