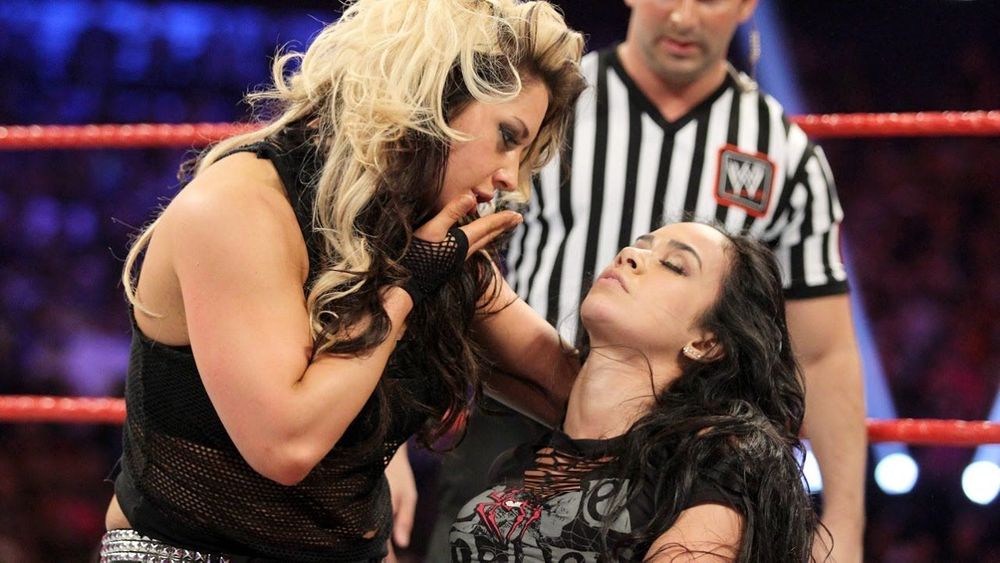 Clara’s run as the Lesbian Wrestling Ring champion had been long and she had bested many contenders in her campaign to be the best that the ring had to offer. It seemed like the belt was destined to adorn her body, making everyone crave for both it, and her, all the more. She started thinking that she was invincible, that no woman could take her down. Maybe this was where she slipped up. Hubris taking root in her mind, not letting her see just how easily it could all be taken away with just a few short moments.

Alya had observed each and every one of her title defenses, observing her prey for any signs of weakness. Taking meticulous notes of anything that she could use to her advantage. Training harder than ever, taking down her own opponents with sheer force of will, she made herself ready to retake the title that belonged to her. With her mind and body primed, she issued the challenge, knowing that Clara’s pride would not let her back down.

The fateful night came quickly, with the arena packed full of fans waiting to see the showdown of the century, confident that Clara would make short work of the Alya. The regular members of the rings took their seats at ringside, just as eager to see this unfold. TG, Winston, Foxy, Neko, Kip and Maverick peered into the ring, knowing just how deliciously intense this was going to be. Directly in the row behind them, Amber, Shiky, Sasha, Gabi, Yami and Caitlyn, Weiss and  Mara had been sat for a few moments already, taking bets and discussing the most likely outcome of the match. Chatting amongst themselves, a hush suddenly falls as the main lights go down, the pathways to the ring lighting up as Clara and Alya make their way out.

Walking into the ring, the two combatants take their place in their respective corners, gazing at each other in their battle attire, leaving very little to the imagination. The ref calls the introduction as the crowd cheers, getting thirsty to see the spectacle that was about to unfold. Finally, the bell rings and they charge at each other, not a second being wasted as they grab each other’s bodies, the fight to dominate one another beginning in a clash that rocked the stadium!

It was hot and intense, watching the sexual goddesses tear each other’s clothes off, grappling and pinning each other down to try and get the upper hand. But the fight started taking a turn when Alya put Clara into a full nelson. Words were whispered into Clara’s air as she was restrained, words that made her wet, made her knees buckle as she tried to fight back. This was bad. How was the champion getting manipulated so easily, so early on in the fight?

Clara broke free and gave as good as she got, trying to push past the fact that for every move she made, Alya countered with double the ferocity, using everything she had to bring the champion down. Again, Clara found herself in a full nelson, with more salacious dirty talk whispered into her ear, making her drip all over the canvas. This was too much. How had Alya learned so much about her, knew what made her tick??

Before long, Clara had nothing left, whilst Alya was seemingly just warming up. Leaning over the ropes, she grabs her strap on, lubing it up slowly as Clara struggles to regain her strength and get back on her feet. No dice. Pushed back down easily, Clara gasps as her legs are spread and the tip of the strap slowly pushes into her soaked sex, splitting her as Alya thrusts her hips rougher, faster. Leaning in and whispering once more into her ear, telling Clara how much she can tell she wants this, how she’s going to serve the new champion as her bitch, how she’s going to cum over and over until she breaks in orgasmic ecstasy.

It was too much. Clara’s body betrays her as she desperately tries not to cum, submitting her pleasure to Alya, who shows no sign of stopping her vicious fucking, pounding Clara completely into submission. All Clara could do was grab onto Alya, holding onto her as her body is wrecked by another orgasm, then another, as her body is used as a sex-toy for the audience to see. In stunned silence, everyone looked on as the champion is dethroned, whilst those closer to the ring whisper amongst themselves. Money changes hands, hands get taken out of panties, noticeably wetter than before they went in. The bell rings, declaring the fight over and done. Alya pumps her strap on into her some more, until Clara shakes and quivers on the floor, drooling as her eyes roll back into her head.

Pulling out and standing tall, Alya takes the belt and parades it around the ring, walking circles around the defeated and broken Clara as she lays there, mumbling incoherently. The crowd rises to their feet and go wild, cheering like animals for the newly crowned lesbian wrestling champion. Taking the mic, Alya stands atop the turn-buckle and takes in the adoration of her crowd.

“The bitch is back, people! For far too long, this pretender has laid waste to weaker fighters to keep my throne! Now the title is back where it belongs and no one will take it from me!”

Looking down at Clara, she smirks and then turns to the crowd, a mischievous and lustful look in her eyes.

“But I won’t be selfish today. Look at her! She’s mine now! But I think that what she needs now is some help from the audience, so that she never even dreams of trying to defy me! Ladies and gentlemen… have at her. But she’s mine when you’re all done!”

Clara’s heart thuds in her chest as she vaguely hears Alya’s declaration to the crowd. No… she didn’t? FUCK…