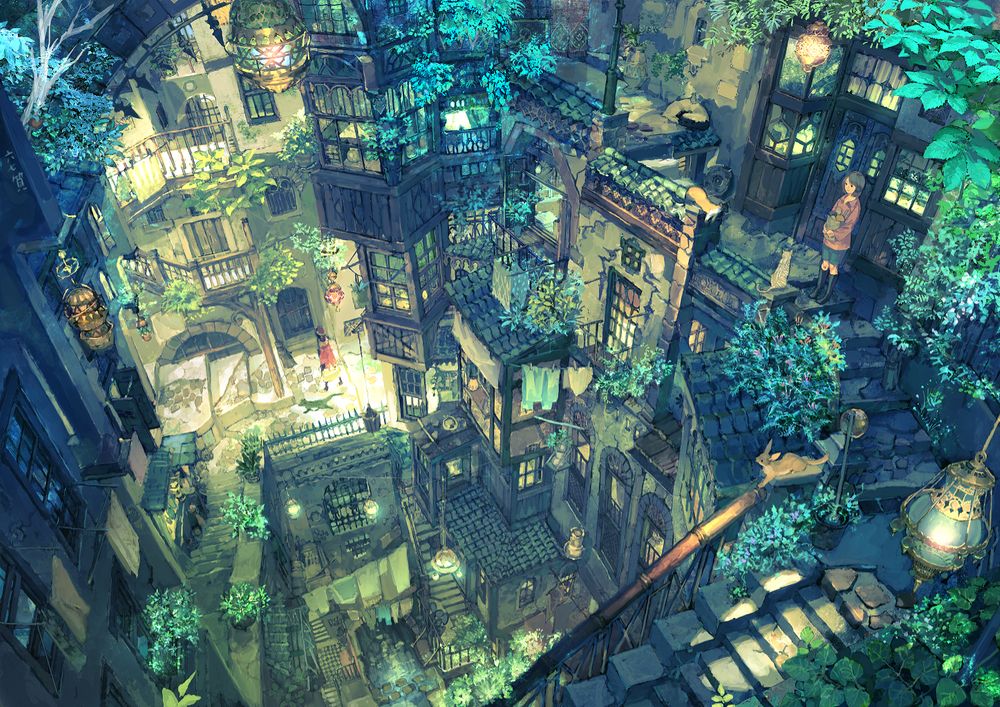 Before we begin our story, I'd like to go through some background information. Roughly a year ago, I wrote the EF Novella, a 9-chapter series for Discord, later republished on the blog.

Two other authors have kinda carried on from where I left off, and started their own stories. I will accept them as canon, and those characters will also be featured here.

This "second season" will have 9 chapters as well, and generally takes place some time after Chapter 9 of A Fox's Past. So I guess if you want to put it in a rough chronology, it would be something like this:

And now we're at Season 2. Good? Good, so let's get started!

Oh. One more thing - I find that this story reads better in the blog's dark mode.

I open my eyes. The moon smiles down on me as it peeks through the window.  I don't know what day it is. I stretch my body, spreading over the bed. My hair is a mess, a convoluted tangle of wavy black hair that cascades down to my shoulders.

I look at the digital clock on my bedside table. 3AM.

Practically leaping off the bed, I shower and get myself dressed, leaving my lavish penthouse on the 32nd floor of EroFights' Discordia hotel, I gaze out of the wide glass windows that line the corridor as I make for the elevator.

I flinch. EroFights is a nice place, but after spending more than a year here, you develop certain reactions to certain sounds. As the elevator announced its arrival with a bell, I feel myself become...physically aroused as Little Winston stirs from his slumber.

Adjusting myself, I enter the elevator, simultaneously relieved and disappointed that no one is inside. I exhale and shake my head dismissing the unwanted thoughts, before pressing the button labelled "18".

The elevator opens up, and as I walk out of it, the smooth, minimalist hypermodern aesthetic of the 32nd floor gives in to the warm, rustic green environment of the 18th. I take my time to descend the stone steps as the elevator closes behind me, glancing down at the sprawling level, multiple floors within one, and wave and nod to some fellow EroFighters before making my way to one of the apartments.

Rapping my knuckles on a handsome oaken door, I am immediately rewarded with several excited booming barks. Chuckling to myself, I turn the knob and let myself in.

I can feel rather than hear the barks growing louder as the Great Pyrenees rounded the corner and scrambled toward me. Closing the door behind me, I wag my finger at my enthusiastic receiver.

"Ah!" I say warningly, causing the big white fluff cloud of a dog to stop in its tracks before sitting on its haunches expectantly. I hold a hand out.

"Frau Wobbles. A pleasure. You may kiss the ring."

Wobbles stares at my ringless hand. Her expression puzzled, as if trying to solve a monumental question of the ages, her face blank, mind racing to head off an existential panic.

Wobbles responds in the only way she knows. She reaches out and bites my arm, taking my slender limb into her maw, oh so softly.

"Oh!" I feign injury, crying out and crumpling to the floor in a heap.

"Thou hast defeated me, Frau Wobbles! You have dealt me a mortal blow...I'm dying...dying...dead. Bleh."

Laying on the floor, my tongue out in mock expiration, I peek through squinted eyes as I see a pair of sexy legs round the corner to join her dog, who still wearing this tensed, puzzled expression, wondering what was happening as if this little charade did not play itself out every night for almost a year now.

Following the legs up, I see Sasha, my lovely bride, sigh in mock exasperation and facepalm. Wobbles looks to Sasha, and then to my presumably dead body, and then back to Sasha, and back to me. Panic building.

Wobbles leaps into action, pumping its forelimbs on my chest, before licking my face in what is an impeccable imitation of CPR. Her movements are frantic and her whimpers grow more desperate as I remain stubbornly stone-dead.

Just as all hope seems lost, I splutter to life, coughing and fending off a jubilant Wobbles as she starts licking my face excitedly.

This went on for several minutes, so I'll spare you the details and have Sasha come back into the scene.

"Ahem," she kindly reminds us of her presence.

"Don't excite her or she won't go to bed and you'll have to take her for walkies again. Settle down, wash up and get ready for dinner," she said over her shoulder and walked back to the kitchen.

"And DON'T give her any more jerky, I just fed her!"

Wobbles looks at me glumly, ears down.

"You heard the boss..." I shrug apologetically.

I stare at the spread that was to be my dinner, the table groaning under the sheer overkill. Sasha glowers at me, seated across the table, the lit candles giving her eyes a hellish tinge.

"You're so skinny because you hardly eat, that's why," Sasha says, by now almost by rote.

"That's gonna change, I'm going to put some meat on those bones, mister," she says, rising and loading my plate up with more food than I can eat in a lifetime.

"Now," she puts the plate down in front of me and sticks a fork into the pile.

"You're not going anywhere until you've cleaned that plate, understood?"

I poke at the delicious pile of food and take a small bite. It tastes like heaven. I take another bite, and another, looking up each time to Sasha's approving smile and encouraging nods.

Biting my lip guiltily I look at Sasha, almost pleadingly.

Sasha's expression is one of bafflement, as if trying to solve a monumental question of the ages, her face blank, mind racing to head off an existential panic.

Quite unlike Wobbles though, she makes no attempts to bite me (unfortunate), but instead rises and walks around the table, and simply straddles my lap and wrapps her arms around my neck affectionately (fortunate).

"You want to make me happy, don't you?" She whispers into my ear. Gulping, I nod, eager to please.

"You know I love you, right?" She starts grinding her body against mine, and this time I dont't need an elevator bell to set me off.

She takes my face in her hands, pulling just so that I tear my eyes off her cleavage and into her blue eyes.

Cowed, I nod submissively, hand reaching for my fork...

"Oh, will you look at that!" I say, half-relieved, half-frustrated at having this gastronomic seduction cut short. Pulling my phone out from my pocket, Sasha huffs and stalks back to her seat.

"Sorry babe," I smile nervously at her and rising.

"TAKE A SANDWICH WITH YOU! AND DRINK FLUIDS!" Sasha yells as I hurry away.

Another day in EroFights, another animal. Literally. EroFights has grown into a sprawling city housing the most lewdest of denizens but some things never change. There's always some clever dick that thinks an animal as their avatar is totally acceptable practice in a city whose existence in based solely around fornication.

After setting the perp straight and seeing to it that they took a more humanoid appearance, I race at a respectful, law-abiding pace down the streets of EroFights City, not headed for Discordia Hotel, but the EF General Hospital.

Striding through the happy domain of sexy nurses and milking devices, I find a delightful redhead washing some medical equipment, and I gave her a firm smack across her pert rear before taking both of her hands in mind as I hugged her from behind.

"Guess who..." I trail kisses down her neck as she squirmed and giggled, rubbing her body against mine.

"So good of you to visit me at work," Lili smiles as she leans back into my arms and basks in my affections.

"Well, I was in the area, and I thought I'd visit my favourite medical worker..."

"Charming..." she turnes her head and we kiss.

"But I have to work right now..." She wiggles out of my grasp.

"What's wrong?" I say, putting a comforting hand on her shoulder.

"It's nothing...you'll think I'm silly," she goes back to washing her equipment, dabbing at her eyes a little to deny the tears forming there.

"You'll always be my Sili Lili," I wrap her in my arms again, kissing her cheek. A soft little sob-laugh escaped her lips.

An exhaled breath. "Well...there's this unclaimed character...inactive for months...it's about to go into the incinerator...it's just...such a shame, such a lovely girl..."

"Don't we remove inactive characters by the hundreds? What's so special about this one?"

A wan smile. "I know you wouldn't understand... I know there's been hundreds, thousands even... they won't be remembered by anyone, but someone has to, right?"

I look at her sad, brave little teary-eyed smile, and sigh.

"Take me to her. Let's remember her together."

Wavy black hair framed her face, innocent and calm in repose. She laid there on the medical table, lifeless, inert. The tag around her ankle read - MARIYA, User Unknown.

"It's sad," Lili agrees, locking her arm with mine. "Such wasted youth..."

"Put her back on," was what I say next, breaking our silent vigil.

"I'm adopting her. She deserves to live out her life."

I turn to Lili, who was wide-eyed in...a strange expression. Gratitude? Incredulity? Surprise? Wonder? Could be one, two, or all of the above. I choose to believe she was happy.

"Look...this is my decision, and my responsibility, I'll handle it...provided you do the paperwork?"

Another one of those sob-laughs.

Mariya opened her eyes, and sat up, blinking at the bright hospital lights as she returned to the world of the Ero-living.

"Hello," I said nervously, trying my best to pretend that a snap decision to resurrect and adopt a total stranger all on a whim was something I did regularly.

"Mariya, I'm Winston, I'll be taking care of you from now on."

"Papi?" She said, almost automatically, like the most natural thing in the world.

My eyes met Lili's, and she shrugged.

"Maybe the original user was Spanish?"

"Well..." I turn my gaze back at Mariya, who was staring at the two of us with some curiosity. I unwrap the hastily packaged sandwich Sasha hurriedly pushed into my hands before I got into the car and offered it to her.

"You must be hungr-" before I could finish my sentence, she had taken the sandwich from my hands and finished it in two bites. This was punctuated by a loud rumbling from her stomach.

As Winston drove off with Mariya, Lili took this time to fill out the adoption form, jotting down all of Winston's particulars lovingly from memory. Filling his name under the heading "father", she hesitated a little before putting down "Sili Lili" as Mariya's mother.

"WELCOME BACK! I KEPT YOUR DINNER WARM- oh." Sasha's gaze wasn't on Wobbles frantically trying to revive me, but on Mariya, who smiled awkwardly.

"Who's the shiksa?" Sasha said suspiciously.

"That...OOF" I wheeze and heave as I try to speak just as Wobbles presses her full weight into my chest again.

Apparently, I also adopted a monster inside Mariya's stomach, and it made its presence known with a growl.

"So this is what it feels like to be neglected," I say to Wobbles as we sit on the couch and watch TV, ignoring the calls of "would you like some more, hun?" and "Yes please, mama!" from the dining room. Wobbles patted my shoulders comfortingly with a paw.

"Still," I look at the enormous fluffy cloud.

"That's one way to finish a dinner, eh?"